General Description:The finless Porpoise, like the Irrawaddy dolphin (Orcaella brevirostris), is said to present the appearance of a small Beluga. The melon is rounded, and there is no beak. The mouthline is curved upwards towards the eye. Behind the blowhole is a slight depression, like a neck crease. The animal enjoys flexibility of this neck, and the head can be rotated freely. Interestingly, this flexibility is also a characteristic of the beluga, which is classified in a different family.The dorsal fin is completely absent, and an area of the skin behind where the fin should be, is dark and covered with small rounded projections or tubercles. The finless porpoise’s flippers are relatively long with blunt tips. The colour is uniform grey-black, often with a bluish tinge and a lighter off-white ventral surface. The lips and chin of this animal are lighter. Juveniles and new born calves are slightly lighter grey in colour than the adults, with white lips and some white colouration around the genital regions. In general, porpoises have a smooth appearance, which gives them the local name of Buliya or Bulga (the smooth or slippery one) in Sindhudurg, Maharashtra. The name ‘Finless Black Porpoise’ was also once widely used for this species. This is not very apt, as the porpoise turns black only after death.

Appearance At Sea: Generally found in pairs, groups of up to 10 Finless Porpoises are sometimes seen. Young calves are said to travel clinging to their mothers’ backs.The Finless Porpoise is said to make a chirping sound, this being one of the reasons for its Malayalam name Eleyan eedi.

While breathing they rise so that they just touch the surface with their blowholes. The lack of dorsal fin makes it look as though the back is submerged but it in fact reaches the surface enough to reveal the absence of the fin.

After 3-4 abrupt breaths the porpoises dive for 45-75 seconds, often surfacing around 100m away. They are quick and lively underwater, swimming just beneath the surface with sudden, darting or circling movements

Found In:These porpoises inhabit inshore coastal waters and estuaries, and are said to frequent rivers. They can occur quite far from shore (upto 200 km) and in waters upto 100-150 m in depth. They feed mainly on demersal species like small fish, cephalopods and crustaceans. Finless Porpoises are found in the same habitat as humpback dolphins but rarely at the same time.

Records from India: Stranding records confirm the species’ presence across all the coastal states of peninsular India. There are many instances of this porpoise being washed ashore or being found in fishermen’s catches, or entangled in gill nets. These are generally single specimens, but up to 17 animals have been caught together.

There seem to be few records from Sri Lanka, though a number of strandings have been noted in Pakistan.

World Distribution: The Finless Porpoise is found in coastal waters of the Indo-Pacific, from Pakistan and India to China, Korea and Japan, including South-East Asia and Indonesia.

Could Be Confused With: There is a possibility of confusion with the Irrawaddy Dolphin Orcaella brevirostris, which also occurs in the same area.

Stranded specimens: The absence of a dorsal fin and beak; jaws with 13 to 22 pairs of spade-shaped teeth in each jaw. 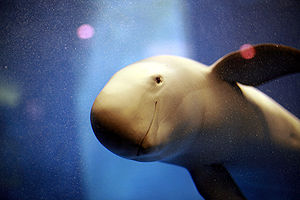