It is also similar in appearance to the Finless Porpoises, but is larger and has a dorsal fin. The dorsal fin is small and sickle-shaped with a rounded tip, and is placed well behind the midpoint of the body. Beyond this, a keel extends backwards on to the tail.

It has broad, long, paddle-like flippers. The mouthline is horizontal. There is a neck crease and the head can be freely moved. The colour of the animal is bluish grey – darker above, paling gradually to the belly

Appearance At Sea: Irrawaddy dolphins are usually seen alone or in small groups of 3-7, feeding or swimming or foraging together.

This species is quiet and inconspicuous, rising slowly to the surface so that only the rounded head or dorsal fin protrudes, and then sinking quickly.

Found In: Irrawaddy dolphins are usually found in coastal waters: rivers, estuaries, backwaters, brackish lagoons and mangrove creeks, not to be seen beyond one or two kilometres from the shore.

World Distribution: Irrawaddy Dolphins are found in the Ganges, Brahmaputra, Ayeyarwaddy, Mahakam and Mekong rivers in Asia. They are also known to be found in the coastal waters of south and southeast Asia – from northeast India till the Philippines.

Could Be Confused With: There is a possibility of confusion with the Finless Porpoise which also occurs in the same area and habitat.

Stranded specimens: The body shape is usually sufficient to identify the species. The Irrawaddy Dolphin has a distinctive skull. There are 12 to 20 pairs of teeth in the upper jaw and 12 to 18 teeth in each side of the lower jaw. The teeth are peg-like. 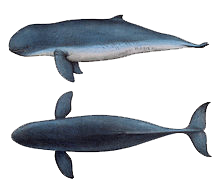