General Description: The largest of the dolphin family, the Killer Whale is robust but streamlined. The head is rounded, with no beak. The dorsal fin is very tall and conspicuous, sickle-like in females and immature males, but triangular and up to 1.8 m tall in large males. The flippers are very large and paddle-like.

The colour pattern is easily recognisable. It consists of clearly defined areas of shiny black and cream or white. Generally, it is black above, with a light grey patch behind the dorsal fin. Chin, throat, belly and undersides of the tail flukes are white. There is a white patch on each flank, connected to the white belly. There is also a white oval patch just above and behind each eye. In calves, the black areas are grayish and the white areas are tinged with buffy yellow for most of the first year.

Appearance At Sea: Extended family groups of Killer Whales live together and cooperate in hunting.

Killer Whales are usually approachable, as they are undisturbed by shipping. They might respond by spy hopping, which involves rising vertically so that the head and body – as far as the flippers– are above the surface.

With their size, appearance and reputation for ferocity, Killers are ‘glamorous’ species.

Found In: Killer Whales may be found in coastal as well as deeper waters. The diet of a Killer Whale is very diverse, including fish, squid, turtles, birds and dolphins. This animal is one of the only predators of large marine mammals, including the largest whales.

There are numerous sightings and strandings from Sri Lanka, Pakistan, the Seychelles, the Gulf of Aden, Djibouti and Somalia.

World Distribution: The Killer Whale is very cosmopolitan, occurring in all oceans, from the tropics to the polar regions.

Could Be Confused With: Killer Whales are unmistakable to be ID’d.

Diagnostic Features: At sea, tall dorsal fin, eye patches, and the flares behind the dorsal fin.

Stranded Specimens:There are 10 to 12 pairs of large conical teeth in each jaw. The teeth are very strong and sharp, and interlock when the jaws close. 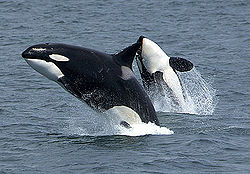