General Description: The body is very broad and the head is U-shaped when seen from above, whilst the tail stock is narrow. There is one ridge from the blowhole to the tip of the snout. There are two slightly concave regions, above the lungs. The flippers are slim and one-seventh the body length. The dorsal fin is very small – less than 33 cm high and variable in shape. It is located far back on the animal’s tail stock. Blue Whales are bluish grey overall, mottled with grey or greyish white. Some animals may have a yellowish or mustard colouration, caused by diatom accumulations. The number of ventral grooves as given by different sources varies from 55 to 100.

Size: Adults,These are the largest living animals. They attain lengths of 24 to 28 m, females and animals of the southern hemisphere being larger. Before whaling depleted Blue Whale stocks, individuals of the Antarctic attained lengths of 30.5 m. Such animals were estimated to weigh over 160 tons. Present day individuals are believed to weigh 100 to 120 tons. Calves at birth, 7m long.

Appearance At Sea: Blue Whales are generally found in close-knit groups of 3-4 animals which may associate with other such groups for feeding and breeding. There are separate populations of Blues in the northern and southern hemispheres. There may be no more than a few hundred Blue Whales left in the southern hemisphere, even after decades of protection. As a result of intense hunting, the ecological balance in areas where whales were once common has been upset. In the Southern Ocean the killing of Blue Whales and Fin Whales Balaenoptera physalus has led to a great increase in the krill population. More krill has become available to other species. The oesophagus of the Blue Whale is quite narrow. Its width is only sufficient to allow the passage of krill that are about 5 cm long. A large Blue Whale can consume four to eight tons of krill a day. After the four months of the krill season in the polar region, the Blues move to the tropics. Apparently they do not feed at all in the warmer waters.

While breathing, the whale surfaces horizontally so that the blowhole and much of the back appear at the same time. The spout is vertical, slender and up to 9 m in height.

Blue whales produce loud and deep sounds that are said to be ‘the most powerful sustained utterances known from whales or any other living source’. They may produce high-frequency sounds also.

Found In: Blue Whales are found in the open ocean, particularly along the edge of continental shelves. They probably do not dive deep normally because their principal food, krill (small shrimplike animals), is found in the top 100 m of the sea.

Records from India: There are many records of Blue Whales being stranded and washed ashore on the Indian coast. There are a few instances of them getting caught in nets, and also of them being seen at sea. Indian records have continued to appear in the 1980s and 1990s. The larger animals among the unidentified rorquals recorded in India may be Blue Whales.

Blue Whales have been observed near Pakistan and Sri Lanka. Strandings have also occurred in Sri Lanka, and in the Arabian Gulf. It has been suggested that some individuals seen near Sri Lanka are Pygmy Blue Whales, B. m. brevicauda. Blue Whales have been regularly found off the north-east coast of Sri Lanka. Individually identified animals have been found in this region in successive years. It could be that the Blue Whale occurs here only seasonally. If so, it is not known where it migrates from.

World Distribution: Blues are found in all the seas of the world. They move to warm waters in winter and frequent high latitude seas in summer.

Could Be Confused With: There is a possibility of confusion with Pilot whales Globicephala macrorhyncus and Globicephala melaena. They can be distinguished as follows:

In the case of Blue Whales, the fluke exposure is fleeting unlike the high flapping dive of Humpback Whales and Great Sperm Whales, which serves as a useful distinction. 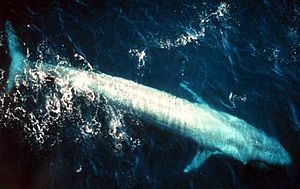